So as some of you might know I said in my last Speakerphone shootout that the Jabra Speak 510 came a close second to the Plantronics Calisto due to some small niggly issues.. Well it seems Jabra has listened to their feedback and have answered the call with the Speak 710

Lets get to the unit, First impressions are good. Build quality is solid and the design is modern yet subtle enough to get away with being next to any device. The two tone look is good as well. Blending with both my Lenovo and my Microsoft Surface.

This a great indication of this units quality and how Jabra have really pushed the envelope when it comes to the industrial design on this unit. Including using several quite expensive production processes to improve the aesthetic, performance and quality of this unit versus the older 510 and Calisto.

It’s not exactly fair to call it an upgrade from the older speak 510 as the 710 takes the design idea of the 510 of a round speaker phone with touch controls and voice feedback and starts again from scratch, making it a bit larger than the 510. The touch controls have been redone. The Voice prompts have been redone even things like the new stand with its rubberised feet to stop it vibrating around the table. And trust me, it needs those as it can reproduce some very deep bass when asked to. 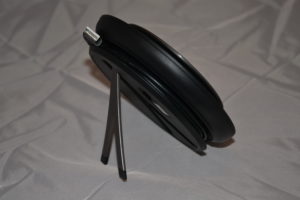 Speaking of the stand, this separates it from everything else in its field currently and its quite important because of one of the 710s biggest features. You can pair 2 together for stereo playback or even just for larger meeting rooms.
Unfortunately I only had one to test with, but I have seen this feature in the wild and it works remarkably well.

With a larger speaker enabling better low end frequency response over the 510. This goes from “my Skype Speaker phone” to “My portable media presentation device that can be my speaker phone”

As for sound quality. At Low to moderate levels I can’t pick the difference between it and the defending-champ the Plantronics Calisto 510. To the point I needed to sample them both with a microphone and then even blind test my wife to pick a winner.
But start pushing into the higher volumes you would use in larger rooms or to overcome background noise and the Calisto distorts whilst the Speak keeps coming for more with plenty of volume slider in reserve.

The microphone is a massive improvement over the 510 and it does a fairly good job of reducing the echo here in my office. Whilst not quite as good as a headset it gets pretty close.

Other things worth mentioning? Well now there is a silo for the new Jabra Link 370. Jabra even changed the colour of the dongle so you don’t confuse it with your older 360. During my testing I had media playing for over 5 hours with battery to spare.

I suppose If I had to complain about something it would be that now all the icons are the same colour unless you’re on a call and there’s no way to stop it getting stolen from a meeting room. But now we are just getting really picky.

With an Australian street price of under $300 these carry a price premium over the 510 and Calisto but I’d expect that to quickly shrink.

Well despite the Plantronics Calisto being the winner of my previous speaker shootout due to the superior quality. The speakerphone I kept in my bag for day to day use was my Speak 510. AKA “The Hamburger”

Mostly because it was easier. Easier to use, easier to charge and easier to get going if was flat or you had lost the dongle.

Jabra nails it with the 710. They take the established simplicity of the 510, solve all my complaints with the original whilst removing the fluff and improving the sound quality along the way. This along with the new Stereo functions for presentations definitely makes this my goto for carrying in my bag. I think I’ll call it the whopper. Shame I have to give this one back to the office 🙂