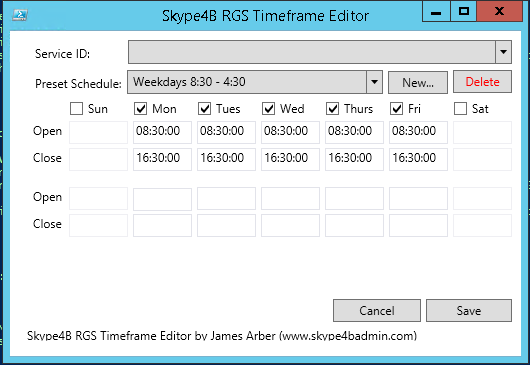 :v1.21 Fixed a bug I introduced in 1.2 re-error checking when creating a new object

:v1.1: Fixed a Bug where not defining a second timeframe would delete the first (whoops!)
:v1.0: Initial Release

What does this script do?

The editor allows you to create, modify and delete RGS HoursofBusiness objects ready for importing into your RGS workflows.

Why do we need this script?

Okay, So here’s another one of my scripts born out of a need to do some stuff over and over again.

Editing timeframes in the RGS Webpage is easy if you only need one or two objects, but the timeframes you create are unique to that particular RGS Workflow object and cant be copied from workflow to workflow
Even worse if you want to edit the time on all of the RGS workflows at the same time, and the fact I found the RGS webpage slow and annoying. is why I created this script

Response Groups supports shared RGS HoursOfBusiness objects, to have a single preset you can apply across a ton of RGS Workflows. But it needs to be configured by PowerShell and remembering the syntax is a pain

How do I use this script?

To create a new timeframe, select the Service ID (Pool) you want to associate the object to and click New…
Type in the name of the new Object and click Ok
The screen will update with some example data.
Place a checkbox in the days you want the WorkFlow to be active and enter in the timeframes and click on Save

If you only want one timeframe per day, leave the second set of times empty.

To edit existing TimeFrame, Select it from the Preset Schedule edit the appropriate Time Frames and click on Save

If you have an RGS Preset you need to edit frequently you can edit the defaults in the PS1 file.