With Microsoft’s Ignite less than 60 days away some conversation has broken out on Twitter here and after sharing my thoughts there, I thought I’d throw a ton more up here.

Not all of my recommendations may apply to you as I fly in from Australia. Typically about 24 hours of flying for those interested. But if even one thing from this list helps make your conference life easier its worth reading. For the uninitiated Ignite can be very intimidating and one your most demanding weeks of the year! So be prepared.

This seems a pretty obvious one, but take a look at the Ignite Planner and start planning the sessions you want to look at.

Seriously. If you think your even slightly interested in something. Add it to your planner and sync it with your Outlook.

We’d like to say it never happens, but sometimes the session you attend isn’t what you expected it was.

Or worse, it gets moved to the other side of the event and there is no way you can make it.

Always have backup sessions planned and keep an eye on the posted wall panels for updates.

Know anyone in the tech space you would like to touch base with that are going? Any vendors you deal with going?

Try reaching out to them on social media and see if they want to catch up. You might even get invited to an after-party or vendor meetup (more on that below)

Going as a group

Start a Teams channel or group

We have done this for the last few conferences and I cant help but recommend it enough, even for a small group of 3.

Having a single location to discuss whats going on and where to meet up for lunch is helpful as well as a shared OneNote for session notes.

I’ve even thrown Twitter connectors in before so we have a simple and easy place to track mentions and hit topics without having to switch to Tweetdeck constantly. 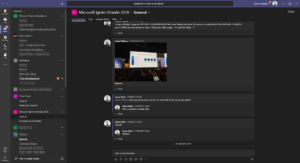 There is typically no point in you all going to the same session. Even if 3 of your team all focus on the same thing. Unless its a big announcement (see Focus Session)

It’s worth comparing preferences before getting onsite and assigning who will goto what.

Perhaps find something a little outside your comfort zone and broaden your horizons or something that can still help your focus even if its not core to your position.

For example I’m a Teams and Skype4B guy, but it pays for me to goto the Windows Server, SQL and identity management sessions as they are all products that I touch as part of my role. You can always keep your original session as a backup should your first preference change.

Sometimes theirs a session that’s critical to what you are doing and you do want several people in it because you want to catch every last bit of info in the session.

Make sure you talk about who is doing what before the session starts for note taking. For example having one person uploading photos into OneNote whilst you type notes in via Teams is alot easier than you taking photos, then uploading them, then adding context.

Have time to setup your room and debrief area. You will spend time decompressing here later and you don’t want to be sorting luggage when your trying to remember stuff and update your team back home.

Shuttle buses and taxis can also get harder to get due to them filling up closer to the event. Save yourself the hassle. Go earlier.

Uber’s can also get a little hard to get, so expect surge pricing and delays. 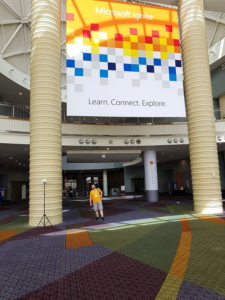 Microsoft Ignite is a totally different experience to things like Microsoft Inspire and aimed at a different audience. This conference is less about business and more about technology enablement. So dress accordingly

Wear comfortable shoes and clothes. Whilst it’s important to make a good impression at these events. Everyone is totally going to understand if you’re just wearing a polo or even a t-shirt and shorts. Don’t be the guy in a Suit and Tie. You’re just going to be hot and uncomfortable.

I’m so serious on the shoes thing that I’m going to post it twice. Don’t wear stiff dress shoes.. Don’t wear boots or even fancy work shoes. You need Runners or Sneakers etc with good padding. If you wouldn’t do a 5km/mi walk in them. Don’t do Ignite in them! (These were the wrong shoes, I bought new ones that day)

Try not to be lugging around anything you don’t need. As Ignite is so big, the last thing you want to be doing is hauling crap around the venue.

If you have a big and light backpack bring it. The bag Microsoft gives is great, but after 5 minutes in the expo it will be stuffed full of the loot from vendors

Trust me you don’t want the cheap vendor shopping bags hanging off your arm.

Remember you cant leave anything anywhere. So if you don’t want to carry it, leave it in the hotel.

(Rip content creators  passionate enough to use tripods and big SLR cameras like Myself, Josh Blalock and Pat Richard) 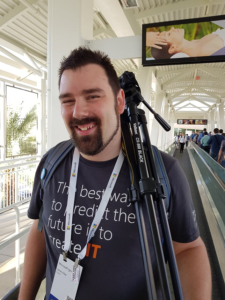 Each day is going to be longer than you expect and access to wall sockets gets harder through the day as peoples devices go flat.

Some sessions will have premium seating with power sockets but these are typically limited and gone if you don’t turn up early.

Make sure you have enough juice to get through the day and don’t risk having your machine flatten itself overnight. Keep it plugged in.

If your using a laptop to take notes and it has a USB-C charger. Consider bringing a battery bank, even if you don’t have USB-C. Look at one for your mobile device as you will likely be out till past 7PM (potentially past midnight) each night.

There are walk ways that link these areas together but they are still outside in the potential heat, so plan accordingly.

There is also a navigation function in the MyIgnite app so telling you how to get from session to session.

Keeping up to date and dealing with session moves

It’s important to keep up with whats going on at the conference in case a session gets moved or is on the other side of the venue.

The ignite app can lag a little behind sometimes, but the screens should always be taken as a source of truth.

If you cant make it to a session on the other side of the conference try the dining hall. There is usually an area with a lot of the sessions on a massive screen. Grab a headphone receiver, pick the right channel and listen to the session on a beanbag 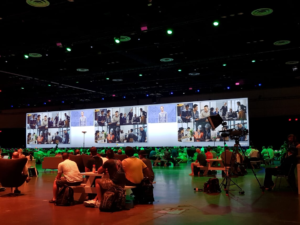 A lot of great and lasting relationships are built at these conferences outside the event, usually at vendor parties and or even just at the local bars/restaurants.

Ideally you will have reached out and planned for these before the event. If not keep your options open as stuff gets announced on the Expo floor or on social media.

These are great to sit down and process everything with others who may have a different take on the information presented.

Also don’t forget about the Ignite After party celebration at the theme parks!

Microsoft does a lot to ensure that there is good healthy food and snacks available in the food halls. There is also catering down stairs if you don’t like whats on offer.

These can get busy but there are drinking stations located everywhere stocked with water and drinks. Just take it / fill your bottle and go.

When you are going for a meal, be aware that you can literally be herded like cattle during peek times. Don’t take it personally. Grab your food. Eat. And move on.

If your an Espresso coffee fan. I have to say either get it somewhere outside the venue or suffer in agony. It’s all percolated horror and tastes like it.

Take some electrolytes / headache tablets in case you have a foggy head from the night before. 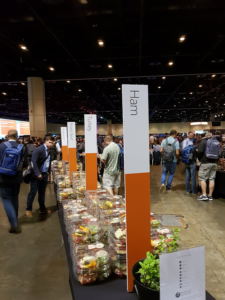 If you can, avoid trying to get a flight just after the event, either leave early and catch an earlier flight or expect to be leaving very late.

Security screening queues at Orlando airport can get really long (even the next day) as its just not built to handle such large amounts of people.

So the longer you can leave it the better. 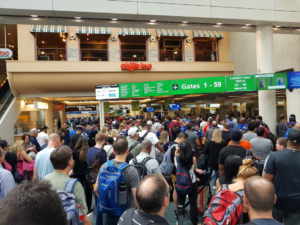 Don’t book anything in your calendar for a week after Ignite.

You will need time to recover, process and follow up on any relevant topics

After the event a lot of the recordings are thrown up on Channel 9 so its worth revisiting anything you missed.

Lastly, be prepared for anyone who scanned your tag in the Expo to call or email you.

For about 2 weeks after the event you will have everyone and their dog following up on potential leads.

These people are just doing their job, so be nice. Let them know honestly if your interested in the product or not and move on.

As frustrating as it is getting all these followups theirs no point getting upset with them. You scanned your badge in the first place!

Seriously though. Have fun. Ignite is a fantastic experience for anyone in the IT and Modern Workplace space with like minded individuals and plenty of information to absorb. Don’t be afraid to take some time for your own personal development while your there and if you need to rest for a bit and miss a session. It’s not going to hurt as much as you think. The recordings will pop up shortly after the event or stuff will be posted by bloggers like me.

Hope you all have a good Ignite and hope to see you there. (Look for the Orange Pony) 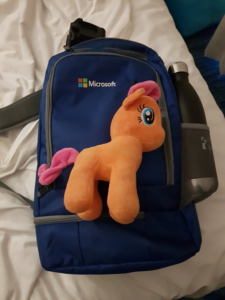 2 thoughts on “ProTips for Life at Microsoft Ignite”