Today I have 2 units. The updated version of the Jabra Evolve 80 and the Evolve 65

I’ve been rather lucky during my time running Skype4B, Vendors are eager for you to rate and review their gear. As I work for a company that tends to stick with one particular vendor I haven’t had much exposure to Jabra gear. Shout out to Jess from Jabra for making this review possible. Sorry it took so long to return the gear!

Full disclosure: I actively sought after Jabra for these review units and was loaned these for review. I’m currently in the process of arranging their return.

These headphones represent mid-tier of the Microsoft UC headset offering from Jabra at almost half the price of their bigger Evolve 80 brothers. These headphones are a direct competitor to the Focus UC from Plantronics so expect many  comparisons to them as they are in a similar class both with their target audience and their pricing. They are also interesting the in the fact that like the Jabra Speak you can connect them direct via a usb cord or via Bluetooth with the included Jabra 360 dongle.

I went into this review straight after spending a considerable amount of time with the Evolve 80’s and when I pulled the unit from their box. I noticed straight away the feel of the construction compared to both their bigger brother and the Focus, with the pieces being loose and rattley. The ear pads once again offer a nice twist in each the vertical and horizontal axis and as with the 80’s the microphone can be stowed in the headband and snaps in magnetically. Unlike their big brothers however lack the cushioning on the headband and the earpads making them difficult on my big head. 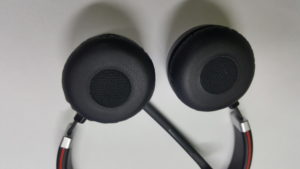 The headband and microphone clicks feel rough, but hold the device exactly where you put it.

On the right earpad are all the devices controls. Volume Up and down. The NFC token for pairing with your mobile device and the call control button. You will also find the micro usb port for changing and a combo power/pairing switch as well as the status light. 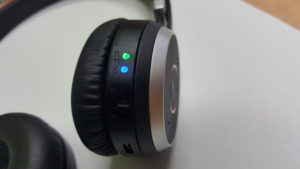 The Evolve 65 showing a Full battery and Active Bluetooth connection 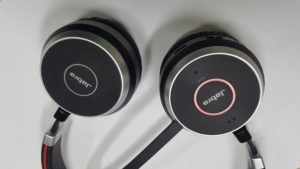 The Evolve 65 with the Busy LED lit

There was however software updates for both the Link 360 dongle and the actual headset itself.

Once again the firmware update was a simple affair and not a repeat of my older speak device with both the dongle and headphones updating with a simple wizard that had me unplug and replug the device to set the new serial number and unlike Plantronics worked fine with multiple devices connected to the same PC. 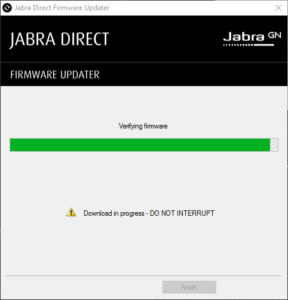 I was unable to find any info on getting Smart Transfer working on these headphones. But as there is nothing to unplug from (yes, I tried pulling the USB dongle) there is nothing for Jabra Direct to detect.

The Headset has a status LED that lights up when on a call, but doesn’t switch on when you set yourself to busy in Skype4B. You can manually turn it on and change your status to busy by quickly tapping both the Volume up and Volume down buttons on the headset at the same time.

Audio quality is always a hard one. I’m no Audiophile and I’m well aware of what sounds good for one person doesn’t always sound good for another. I also hate using made up words to quantify how a headset sounds as many years ago I used to fit car stereos where everything is measurable. I’d get disappointed after spending an hour tuning a customer’s install to sound just right only to have them turn something stupid like “SUPRBASSSSS” to broadcast their doof doof for all to hear.

Mid and Mid-low end sounds are reproduced superbly, with no detectable compression artefacts from the Bluetooth connection. Low end is a little lacking and you might pick some issues in the high end if you go looking for it, but still leaps and bounds above the Evolve 80’s sound quality. To the point your unlikley to pull out your dedicated music headphones to listen to some music whilst you work unless your diving into a hardcore coding session. The lack of noise cancelling means to do need to turn them up a bit more. Due to the pads not sealing they bleed audio so you can announce to everyone your listening to My Little Pony videos again.

The Evolve 65 gives clear speaking audio with a slight background hiss and distorts ever so slightly on “sl” sounds , whilst my desk fan test makes wind noise notable its not going to cause any pain. I did notice in my particular scenario there was some Bluetooth signal issues evident when testing with the dongle plugged into my surface and my head less than a meter away.

Evolve 65 via USB in wind

Evolve 65 via Bluetooth in wind

At half the price of its bigger brother and with superior music reproduction it’s hard not to like the Evolve 65. These arent going to replace your “on the train” music headphones but are more than capable and their Skype4B integration with mobile devices makes them a good choice over traditional corded headsets. Just make sure you keep them in their carry bag so they don’t break.

One thought on “Jabra Evolve 65 Review”