Welcome back to something I haven’t done in a while. Headset reviews!
As usual for disclosure, this headset was provided for review by my local Jabra partner.

Yes, we all know that reviewing base model headsets like the Engage can be “boring” but the truth of the matter is, these are what most of your day to day workers are going to use! Not everyone wants or needs music-focused headphones with calling support.

Many workers today just want the ability to make and receive calls using Skype/Teams without a manner of fuss. Whilst many headsets fit that description, I keep finding myself drifting towards the Engage 50 whenever I want to present something, record something, or join a meeting from my office. Despite having a massive collection of “Premium” headsets, including the Jabra Evolve 85 and many cordless options in a box in the garage.

So why do I keep coming back to a “cheap” headset?

Like the Evolve 40 that it looks aimed to replace, the Engage 50 comes in both a mono and a stereo variant. I’m reviewing the stereo variant today.

The headset hardware is fairly standard fare for devices in this price range. Mostly light plastic construction with a thin metal band encased in plastic ensuring a decent fit on the head. Double hinges on each ear cup for both forward and back rotation. (90 degree’s either way for a full 180 so you can lay it flat) With a small amount of up and down flex to help with comfort. No need for Box heads here!

Speaking of comfort, It sits nicely on my large noggin and despite having smaller drivers (speakers) it uses large puffy ear cushions to give a good feel. It’s not a large on-ear design like the Evolve 75’s are. Instead, the speakers are contained in pods much smaller than the earcups to try and reduce weight. This also appears to help with the size when packing down small to stick in a drawer or the like.

As with most Jabra stuff I’ve looked at before, the focus here is on the microphone. And whilst I initially had a quirk recording some audio via USB-C through a dock. A firmware update fixed that quick smart.

There are actually 3 microphones in the headset, coupled with its inbuilt DSP it does a great job of isolating background noise.

This video was shot using it with the kids playing in the next room. The DSP does a good job of knocking them out.
And this one you can actually hear I have a cold (and I don’t have background music)
And lastly, this is on the firmware that fixed the bug I had with the dock.

The microphone on the headset can also flip all the way over so that it can be either on the left or right of the users face by reversing the headset. Unfortunately, it doesn’t auto-detect which side it’s like some higher-end models. But this only matters if you’re listening to music and is quickly addressed in Jabra Direct. It’s set to on the right by default if you’re wondering.

Jabra Direct is the bundled software that lets you get into the nitty-gritty of the device settings. As with most headsets it’s not required in the slightest to make the device work. But opens up the devices full functionality as well as keeping the headset and controllers firmware up to date.

It’s come a long way since last time I looked at it, appearing to have been completely re-written from the ground up and with multi-device, multi UC client and even provisioning support.

It even found zoom and my PLT dongle which it throws some nice errors about but still plays quite nicely with.

A handy thing for IT departments is it actually gives feedback to the user about how their mic is positioned, which as far as I’m concerned is a godsend actually reminding users if the mic is in the right spot with a Windows notification

Updating the device firmware these days is a helluva lot easier now than it was last time I tried. Just press this and follow the bouncing ball.

I will say with all the improvements that Jabra has made to the software, I was a little miffed when I saw this notification pop up asking users to give the device a rating. It’s only happened once, so I guess it’s not that bad…

The new mid cable controller Jabra is using is a great departure from the old “Puck” included with the Evolve series.

On the left, we have the new Engage controller and on the right the older Evolve controller. This gives you a lot more tactile feedback when you aren’t looking at it, the important buttons are big and easy to find with the large dial controlling volume, in the middle we have mute. With a big Answer/Hangup button on the bottom.

The new controller comes in both USB C and USB A flavours. With a built-in USB C port for connecting the headset instead of the legacy custom 3.5mm TRRS headphone jack. But as the headset uses USB-C to connect it to the controller you can plug it in directly to your PC or Android phone too! The controller even works on Android for volume/PTT if you like) 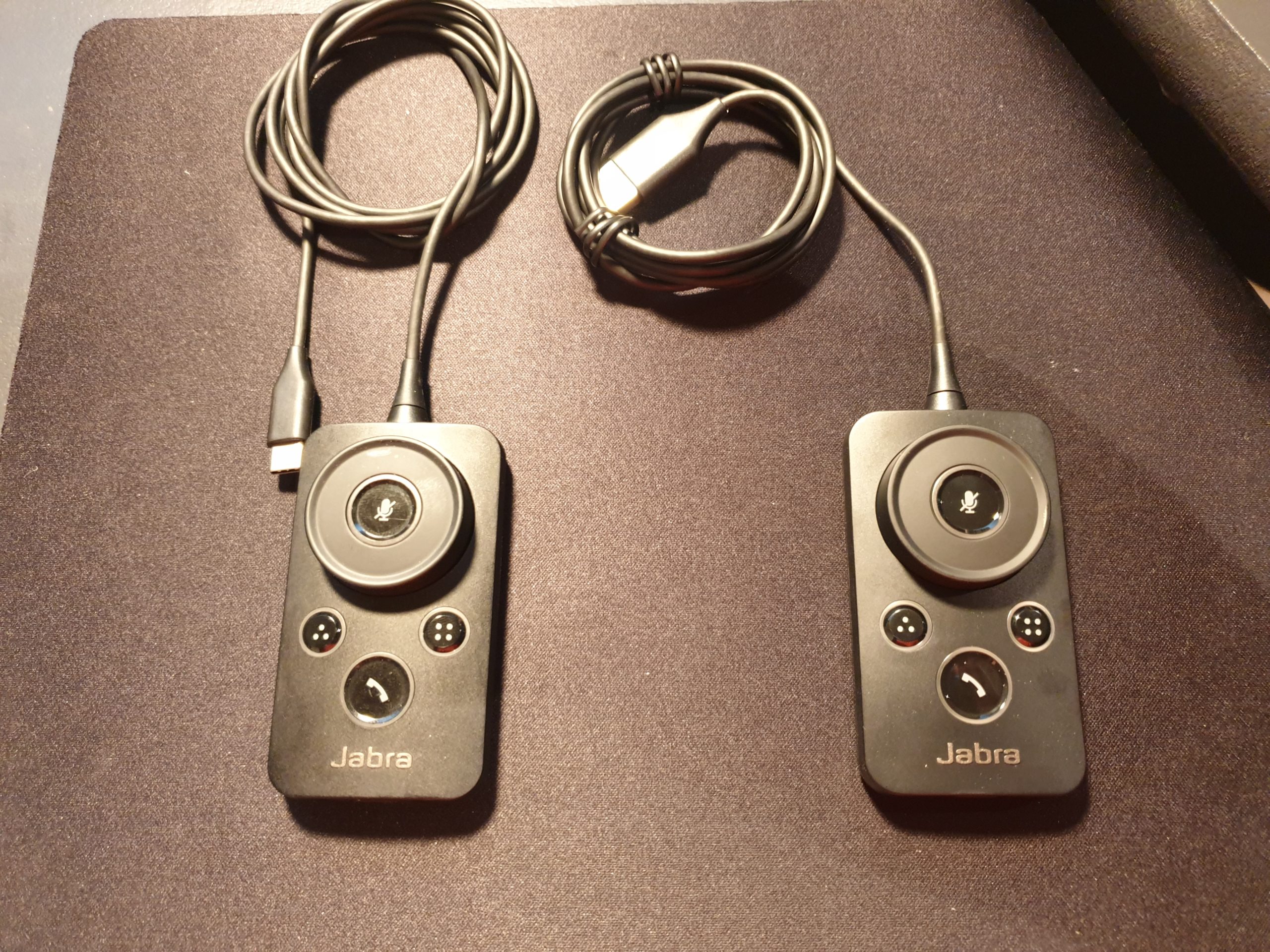 It’s great to see this feature, especially with the death of the headphone jack.
One issue I did have with it connected to my phone was that I couldn’t get Android 10 to route the default phone app sound via the headset. The camera app and everything else would use it seeing it as a headset. So there’s something to keep in mind.

The two buttons with the dots are customisable. They can be set to manually control status, mute (in case you want more mute buttons) or even speed dial!

Speed dial works brilliantly. Simply enter a number as you would in your client and as soon as you tap it, the preferred UC client is opened and the number dialled.

Push to Talk simply internally mutes the microphone and illuminates the key red. When you press it, your audio passes through and the LED turns green. As soon as you let go, its back to red and mutes. It doesn’t mute it at the OS layer either so your UC app won’t pester you saying you’re muted.

I’m really liking the direction Jabra is going with their hardware these days. A lot of effort has gone into the little things that matter instead of marketing hype. Sure halo products are great, but for headsets that just need to work well every time, I’m having a hard time faulting it. Did I mention I like the microphone? like really like the microphone?

2 thoughts on “How the Jabra Engage 50 Became a Daily Driver.”