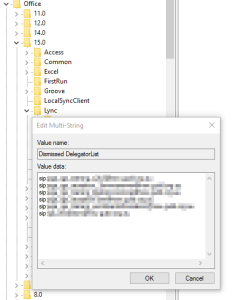 This finds any policy that enables delegate sync and displays its name, as it was defined on the Global client policy I also run

To find any policy where the value has been set to False at a more granular level.So after some digging we noticed that the delegators (that is the users that have delegated access to another user) had since left the company.A quick check with Get-csuser showed the user no longer existed in Skype4B

But as per company policy, they still existed in AD and were disabled. (this may be unrelated)

However, when checking with Sefautil, we can see the users delegates are still stored in the Skype4B Database.

Thus as we know the users delegate status is stored in the Skype4B SQL server, we can manipulate it directly using sefautil like this.

Now the user will stop getting prompted to accept delegate rights for a user that doesn’t existHope this helps.